Break out the body paint, hair dye and costumes because Halloween is less than one week away! In order to give you some ideas and inspiration for Halloween looks and costumes this year, we decided to do a round-up of our favorite looks from our influencers! These creative talents give us so much inspiration and we’re in awe of all they do! Let’s take a look at some of our favorites from this year, to give you ideas for what to wear this Halloween. 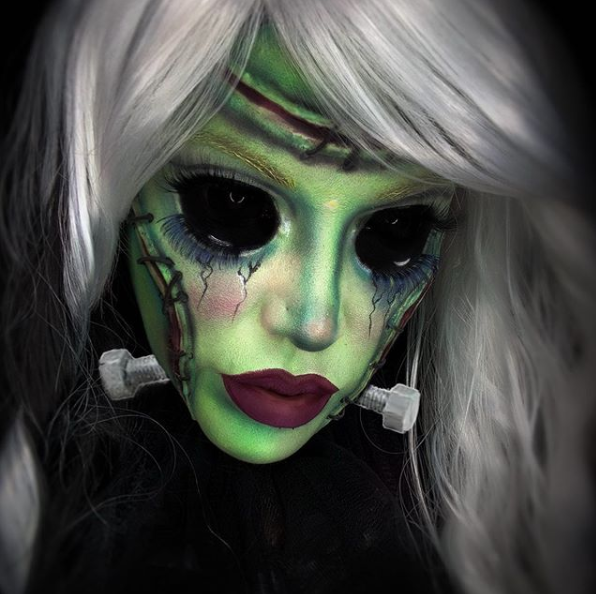 Some of the most intricate and spooky Halloween makeup and body paint looks are from the one and only Queen of Halloween herself, @luvekat. Her attention to the littlest detail and her scary-good body painting skills set her apart from other influencers. Kat’s work is true artistry and her love of special effects makeup definitely shows. With the stroke of a brush she brings her looks and characters to life. Her Instagram is filled with inspiration for you this upcoming All Hallows’ Eve. Most recently, she made her own unique twist on Frankenstein’s Monster. She’s got it down from the bolts coming out of her head to the haunting black eyes. Other favorites of ours include her Human Voo-Doo Doll and Miss Hallow Eve. Ready to be blown away? Check out her creations at @luvekat. 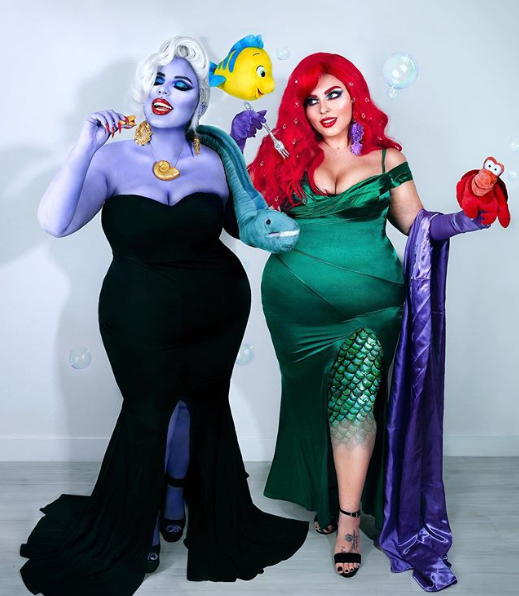 Those who haven’t seen Jazmina Daneil’s costume ensembles are poor unfortunate souls. Jazmina is the absolute best at lip art, but she took her skills to the next level with all her costumes this year. So far, she has posted four incredible Halloween looks. She has perfected everything from each character working on every detail. The hair in each post is flawless, her makeup and body paint are perfection and the clothes she wears amazingly emulate the character so well. Jazmina created looks for Ursula and Ariel from The Little Mermaid, Morticia Addams from The Addams Family and Genie from Aladdin. See them for yourself on her Instagram at @MissJazminad! 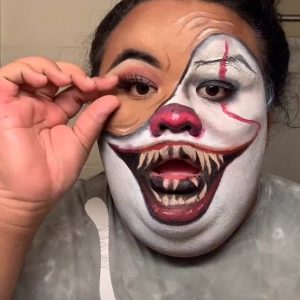 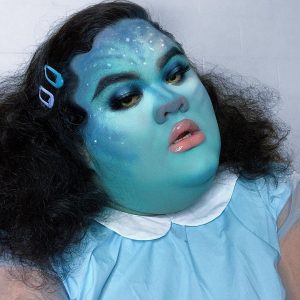 Ese’s bold, vibrant and colorful face-painting skills are on full display on his Instagram, @ese.milan. Watching Ese transform is truly mesmerizing. He provides an array of looks both simplistic and intricate. The closer Halloween gets, we hope this makeup queen creates more looks because we can’t get enough of them! Some of our favorites from his most recent posts include Jack Skellington from The Nightmare Before Christmas, Avatar in Wonderland, Mystique from X-Men and, the scariest one yet, is his take on Pennywise from It. You can recreate his looks simply with a face painting palette, such as Mehron’s Paradise Makeup AQ 30 Color Palette. 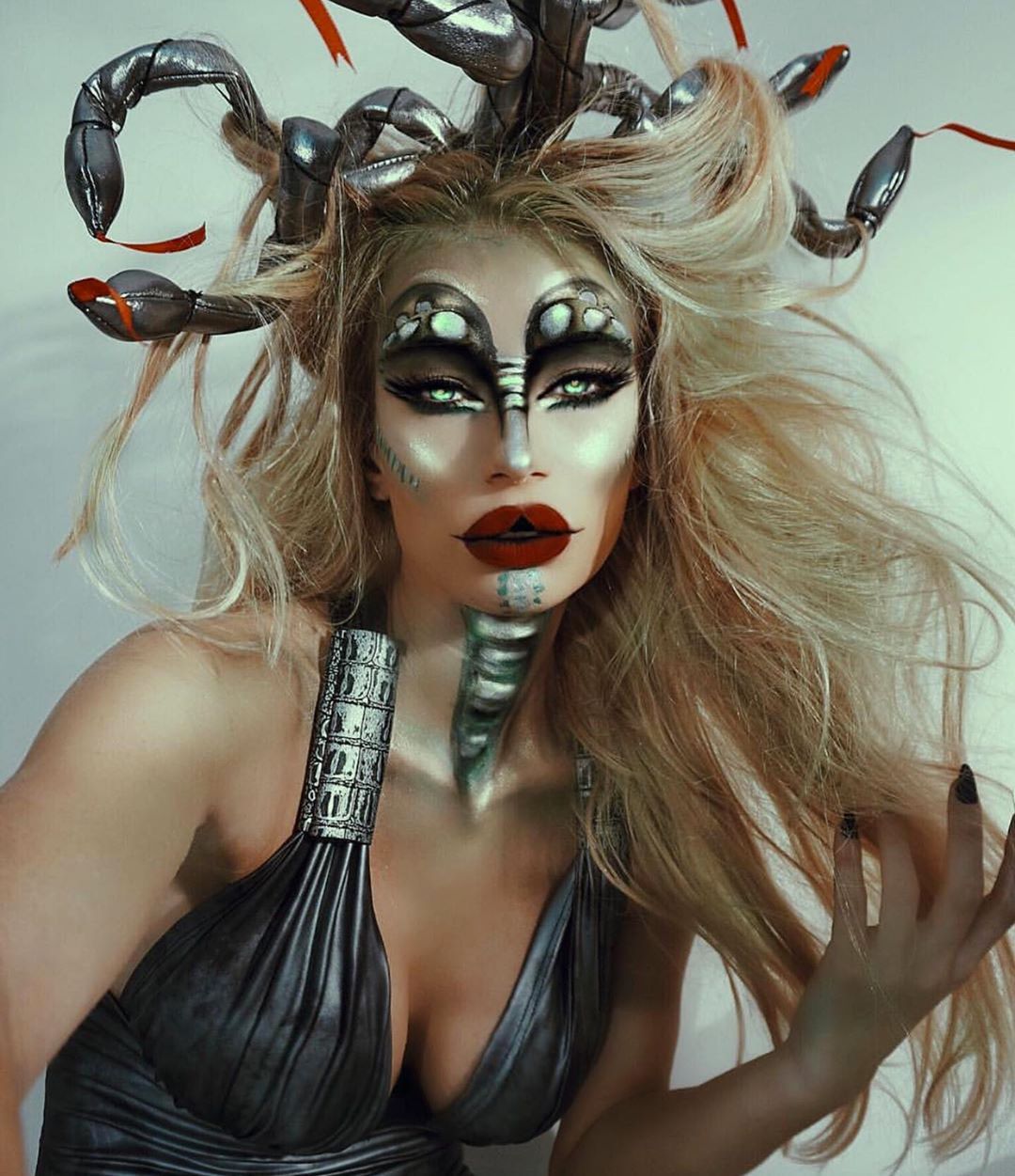 Nikki French is usually known for her glam makeup looks, but for Halloween this year, she took her skills to the next level. Her look is inspired by the Gorgon in Greek mythology, Medusa. If you know anything about Medusa, you know she has snakes for hair and alluring eyes to draw you in. Nikki achieved this herself with mesmerizing eye and face makeup. She even tops off the look with fake snakes all around her head and an outfit suited for a Greek mythological character. We know you turn into stone if you look into Medusa’s eyes, but we just can’t help but stare and admire Nikki’s incredible work! Check out her other costume and glam looks at @nikkifrenchmakeup. 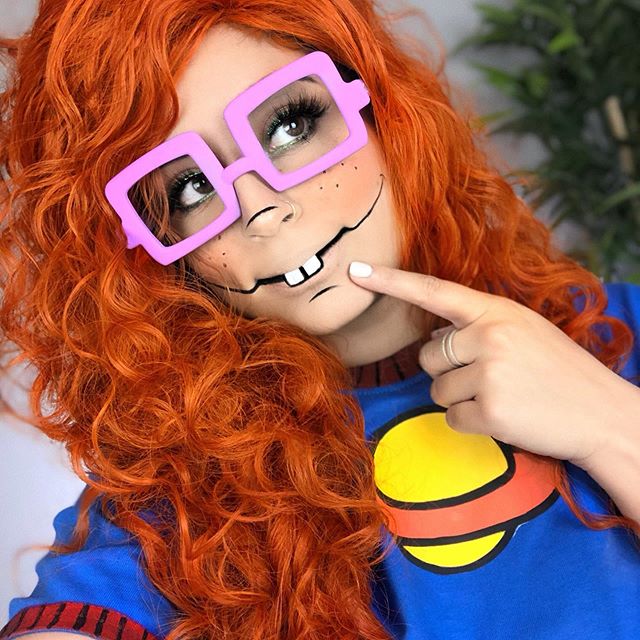 Chuckie is the cutest and nerdiest toddler to ever to appear on the TV and movie screen, and we’re living to see him come to life in any shape or form. Thankfully, Manal chose to do her own takes on the adorable and lovable Chuckie Finster from the show Rugrats. She completed two looks she calls “Baddie” (a more wearable version that’s perfect for the office) and “Cartoon” (for when you go out at night for your trick-or-treating). On her Instagram @Manal, she takes you step by step while she creates her two versions of the cute and sweet Chuckie. She choose an orangey red wig and made square glasses paired with a shirt she created herself! The shirt is spot-on to what Chuckie always wore during the show. Manal’s throwback costume is giving us serious inspiration, what about you? 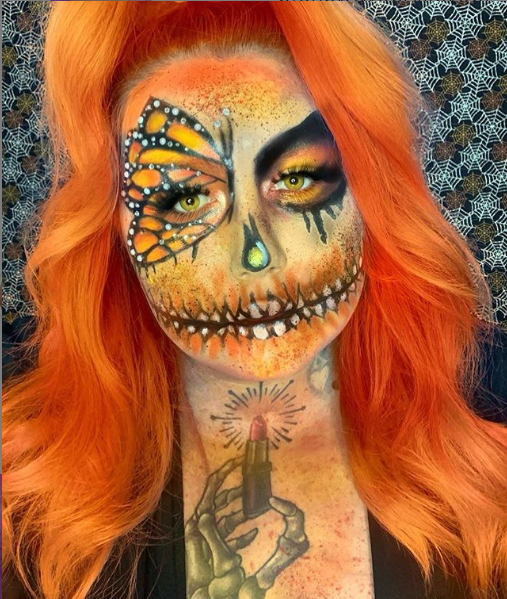 You Give Me Butterflies

It’s hard to choose just one look from Alexandra’s Halloween posts. She’s created looks inspired by Medusa, dripping ice cream, the cutest candy-colored skull and more. Her butterfly makeup, as goes with actual butterflies, is both beautiful and transformative. Alexandrea can rock any hair color, which makes her makeup creations vast and varied. She’s giving us major color inspo! If you want to try a vivid shade the one she’s rocking here, we recommend Punky Hair Colour for conditioning shades that stay vibrant for 4-6 weeks. Anyways, Alexandra excels at crossing over something that should be pretty and puts a spooky twist on it. Also, we love how her use of color contours the gorgeous features of her face. Check out more of her looks at @alexandravillareal. 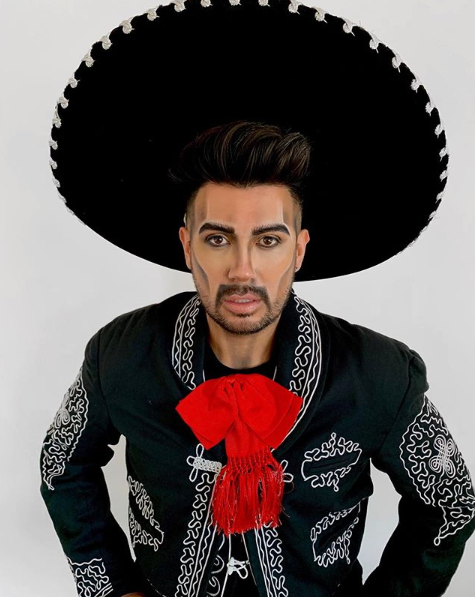 Antonio Estrada is known for doing unique and stylish braided looks, so when we saw his recent posts including makeup and costumes, we were truly blown away! His full Halloween ensemble is muy caliente! He calls his look the “Dead Sexy Mariachi” and we can see why! Antonio’s hair looks amazing (no surprise there) and his strategic placement of dark contour and highlights on his face finished off the look perfectly. Additionally, he also completed a “Glam Day of the Dead” tutorial. Complete with bold red flowers in the model’s hair with pins sticking out and detailed paintings of black and red face makeup to achieve the ultimate Day of the Dead look. See transformations for yourself on Antonio’s Instagram at @antestradahair. 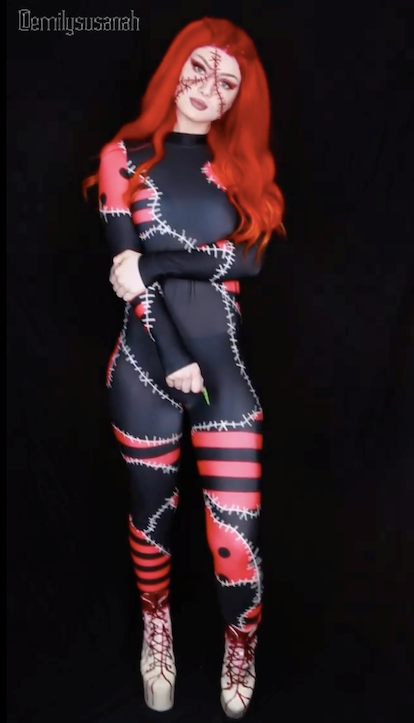 The Cotton Candy Queen herself decided to go darker in her second Halloween look she posted this year and we love it! Emily stuck to the colors red, black and white, similar to the vibes Antonio was giving in his previous look. Watching her piece together the stitches on her face is so crazy because it looks so real! We highly recommend giving this tutorial a glance, whether or not you plan on recreating this spooky makeup. Emily also created a truly out-of-this-world alien creation as well. She used blues, greens and silver for her hair, makeup, nails and costumes in order to give off a more futuristic look. To top it off, she even has the three eyes as a headband on top of her head. See this tutorial and more on her Instagram page, follow @EmilySusanah. 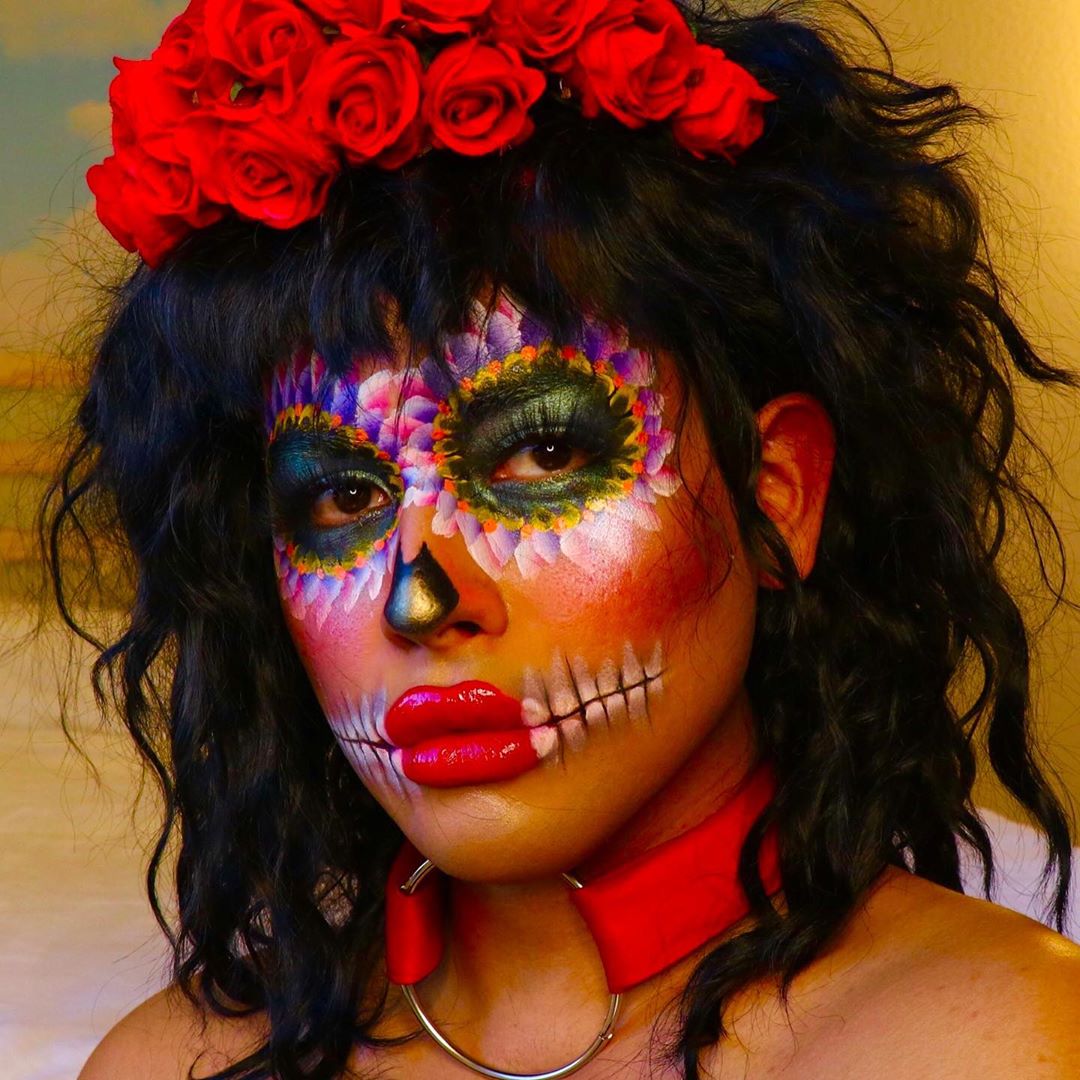 Day of the Drop Dead Gorgeous

Finally, one of our most favorite looks of the bunch is from @Yire_Castillo. Gabriel’s patience and attention to detail over the littlest things is truly incredible. He is known for using bright bold colors in his posts and this Day of the Dead inspired look is no exception. The red flowers are beautifully placed on the head like a crown. The eyes are blended with shimmery shades of blue and green while outlined with yellow and orange. Then, the makeup is topped off with purple, pink and white petals to incorporate even more color and further drive home the floral theme. The other effect we’re in awe of for this look is the lips, and his skeleton smile. If a Dia de los Muertos celebration is what you have in store next week, we highly recommend recreating this look to pay homage to this beautiful, colorful holiday.

Which of these looks is your favorite and what are you going as for Halloween this year? Tell us in the comments below! And, as always, stay creative! #imaneditour